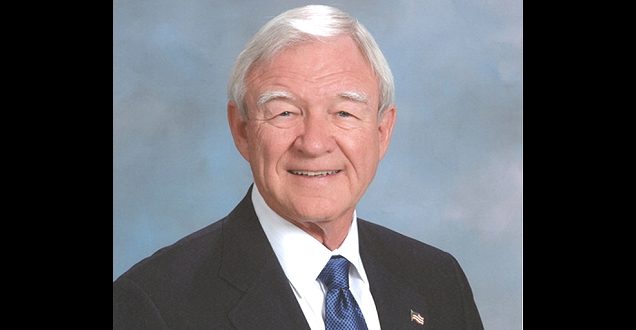 Richard Oliphant is the President & Founder of Oliphant Enterprises, a leader in the construction and development business. An acknowledged forerunner in the building industry and a firm believer in returning to the community what one has received from it, Richard’s record providing community service is extensive. He served two years as Planning Commissioner, six years as a City Councilman, two years as Vice Mayor, and eight years as Mayor for the City of Indian Wells, CA.

Kate Buckley: I’ve interviewed a plethora of accomplished people for my Spotlight series over the past three years, but your resume may take the cake—entrepreneur, business leader, philanthropist, influencer, educational enthusiast, former city councilman and mayor of Indian Wells. You have a reputation for pulling off what others deem impossible. What drives you?

Richard Oliphant: I have been accused of being a visionary and doer.  My character is to be a problem solver.  My business requires problem solving and I have been, fortunately, good at it.  I am a resident for over 50 years of the Coachella Valley.  My goal has been to build the economics of the desert through education, business expansion and non-profits.  That is why I was a founder of the Coachella Valley Economic Partnership, the Greater Palm Springs Convention and Visitors Bureau, the Cove Communities Public Services Commission, Desert Sands School Building Corporation and the California State University Palm Desert campus.  I see opportunities and I act on them.

Who do you count as your biggest influences and why?

Personally: My wife Jan has been my biggest influencer.  Business: Two people who believed in me at a very early age.  Fred Busby, my boss and mentor in Tucson, Arizona where he allowed me to design, construct and sell the first golf course community of its kind. He gave me the land and a check book and I constructed the entire project in less than a year. Second is Frank Goodman, who became my partner in Palm Desert. We joined forces in 1964 and ended only when he passed away a few months ago.

Your domestic projects include designing tennis complexes, golf courses, retirement communities, apartment complexes, and commercial and medical centers. I understand you now also consult on projects abroad—can you comment on where, and what sorts of projects?

I started consulting offshore, representing Charlie Pasarell and his investors in the design, entitlement and permitting of a 2200 acre project in Isabella, Puerto Rico. The project had 2 ½ miles of ocean frontage with 1 ½ miles of white sand beach.  We also owned about six miles of the only clear water river in Puerto Rico. I completed that project ready for construction in 1998. I competed with 10 international development consulting firms to represent HH Sheikh Tahnoon Bin Mohammed Al Nayhyan.  I was selected to consult on the development of two golf courses, tennis facility and housing.  I was also asked to look at their water usage and modernize the delivery systems. I remodeled their theme park and helped with many of their site planning issues. I spent two years accomplishing the goals of their government.

I spent six years flying the coast of Baja, Mexico, where our company had been awarded the export of all abalone and scallops off the peninsula. I built four factories down the coast and organized the villagers into cooperatives. I managed the operation and flew FDA inspectors, as well as Mexican government officials, monthly to all the sites. We had a Mexican Air Freight company fly our products from Mexico to San Francisco.

Your development projects as well as your philanthropic endeavors have earned you numerous honors and awards, including international recognition. Of all your considerable accomplishments, which are you the most proud, and why?

It is very difficult to single out a award as your favorite. None of them were expected, but every one appreciated. I do have to say, being honored by my peers in the construction business by inducting me into the California Building Industry Hall of Fame was a highlight. Given the opportunity to become a Fellow at University of Cal. Riverside, allowing me to lecture graduate classes on a number of interesting topics was also a highlight. The receiving of an Honorary Doctorate from the California University system in recognition of my leadership in getting their four year campus to the desert was also a highlight.

You developed all three phases of the Indian Wells Tennis Garden. Do you feel this has strongly contributed to the changing face of the Coachella Valley? Why or why not?

The locating and building of the Indian Wells Tennis Garden is a proven economic and social asset to the Coachella Valley. The Tournament outgrew its site at the Hyatt Grand Champions and had to move. Las Vegas made a strong bid for the Tournament owners to relocate it to the Summerlin area.  It turned out the weather in that location around the first of March is very cold and windy which negated the Las Vegas possibility. We almost lost the tournament again to the Chinese when the ½ owner wanted to sell. Fortunately, the other ½ owner would not sell and the partner was bought out.  The facilities and tournament were then sold to Larry Ellison, and things have changed for the better.  Mr. Ellison wants this to be the best tennis experience in the world and we are quickly making that possible for him.

You served as mayor for the City of Indian Wells for eight years, and under your tenure, the city went from near-bankruptcy to becoming the second wealthiest city per capita in California. How did you pull that off?

I joined the Indian Wells City Council in 1976. The city was self supporting and a private bedroom community. As time went by, State laws changed with Propositon 13, lowering taxes the city received from property. Then came Proposition 4, the Gann Initiative, that charged the City to spend or return any funds it had in its treasury that were a result for charging more for their services than it cost to provide them. These two Propositions blew a hole in the treasury and the City started going broke.

I became Mayor in 1984 with a $350,000 annual negative cash flow and only $5,000,000 left in the bank.We formed a redevelopment agency and acquired land for two golf courses.  We attracted two premium destination hotels, and over a two year period were able to turn the economics of the City around. It was controversial, because we were no longer a bedroom community. In the eight years I was Mayor, we went from near bankruptcy to the 2nd wealthiest city in California.

Along with your wife, Janice, you are a firm believer in giving back to your community and are renowned for your philanthropic work, especially in the area of education. Why is this so important to you and Jan?

My wife and I raised five children [Richard with two of his and Jan’s five children pictured at left] in the Coachella Valley. With that big of an investment in the schools, we both got involved.  We led bond issues, worked to help individual schools and the District as a whole.  In 1976, I formed a School Building Corporation for the Desert Sands School District. Through bond sales, this Corporation has funded the largest percentage of new construction in the District since 1976.  I am still President of that Corporation. Jan became the President of a small private school called Marywood Country Day School.  She took the school from about 35 students to 375 students over an 18 year period.  The school had one of the finest reputations in the field of education.

Together with Betty Barker, Jan and I raised $42,000,000 to construct the Cal State Campus, Palm Desert.  I started working on the project in 1985 with portable trailers on the campus of College of the Desert. The classes grew and I knew we needed a permanent campus.  Through the generosity of the City of Palm Desert, 200 acres were donated for a Cal State campus.  The three of us, together with the local Dean, started raising funds.  In 2000, we moved into our Gateway building, and in 2010 we delivered the 4th building. My wife and I still represent the campus in many ways and continue our support and interest.

Along with the late President Gerald Ford, you founded the Lincoln Club of the Coachella Valley. Tell me about that organization.

Area republicans felt the need for an organization that could help select candidates for office, educate, and expose the membership to State and Federal leaders, and help build a Republican registration program.  The Lincoln Club does these things.  Sonny Bono, Duane Roberts (owner of the Mission Inn), Jim Brulte (assembly leader) held a meeting at Sonny’s house to form the Club.  No one stepped forward to lead it.  The day after the meeting, Jim Brulte came to me and told me I was going to be the Chairman of the Board. Tom Freeman (County trade commissioner) would be President.  I told them we needed to have credibility, so Tom and I visited President Ford.  After I explained the purpose for the Club and our need for his endorsement by being our honorary chairman, he agreed and became very active with us. I am now the Chair and the President, and the Club is doing very well.

Many people in the Coachella Valley view you as a visionary. Do you view yourself that way?

I have always been someone who can identify a need, and visualize the end result of satisfying that need.  To be a successful developer, you have to be a person of vision.  As a developer of over 60 years, I have been able to see the results of my vision.  I feel very blessed to have the career I have had.

What do you love most about Greater Palm Springs and the Coachella Valley?

I came to the Valley in 1962 when there were about 50,000 residents in the entire valley. I was also building in Livermore and in Rancho Santa Fe.  We could have lived anywhere. We chose the Coachella Valley and put down deep roots for our family. It worked and we have had a very happy life here. Four of our five children returned to the desert after University, so we have been able to have our children and grandchildren close by where we can interact with them daily.  We have traveled the world, but we are always so happy to get home to the Coachella Valley as we have never visited anywhere for which we would trade our life here.

Kate Buckley is a brand strategist, premium domain broker and consultant, interviewer, storyteller, visual artist, and award-winning poet & writer. She’s worked in media and marketing since 1997, holds an MFA in Creative Writing, and is the author of A Wild Region (Moon Tide Press) and Follow Me Down (Tebot Bach). A four-time Pushcart Prize nominee, her awards include a Gabeheart Prize and the North American Review’s James Hearst Poetry Prize. She was most recently shortlisted for the Bridport Prize. A ninth-generation Kentuckian, she’s made her home in Southern California since 1998.
Previous The Music of Elton John to Highlight Food Samaritans’ “Evening Under the Stars” Gala
Next PalmSprings.com Spotlight: Melissa Morgan of Melissa Morgan Fine Art