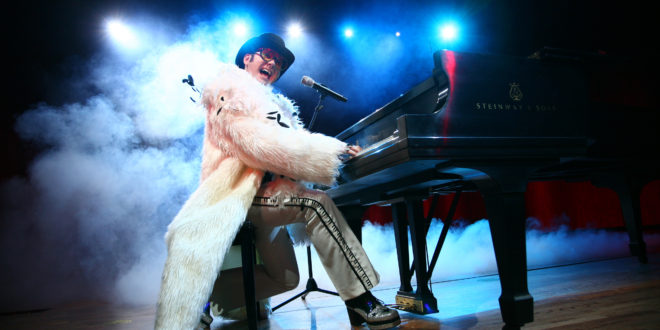 Got your tickets yet? The Food Samaritans (AAP) legendary annual gala is just around the corner! The 27th annual “Evening Under the Stars” gala will feature the music of Elton John in a show titled “Almost Elton John,” starring Craig A. Meyer and featuring the Rocket Band. The performance, along with cocktails, community awards, dinner, and dancing, will take place Saturday, May 2, 2020, beginning at 5:30 PM at the O’Donnell Golf Club in Palm Springs.

“Each year we bring a fascinating entertainer to our stage, and this year we are elated to celebrate the music of Sir Elton John,” said Mark Anton, CEO/Executive Director of AAP – Food Samaritans. “This event is not only a great fundraiser, it’s also a great show, and it’s sure to be an extraordinary night. We hope everyone will get into the spirit of the music and dress in attire reflecting the glam / posh movement epitomized by Elton John and David Bowie. Channel your inner Elton!”

The evening’s musical journey will celebrate the decades of chart-topping hits by Sir Elton John, including: “Benny and the Jets,” “Philadelphia Freedom,” “Crocodile Rock,” “Goodbye Yellow Brick Road,” and “Candle in the Wind.” A celebration of the character, costumes and charisma of the famed pianist and singer, Meyer’s show has captivated audiences throughout the United States and abroad.

Evening Under the Stars is the largest annual fundraiser for AAP – Food Samaritans, a non-profit organization that provides nutritional support for low-income people living with HIV/AIDS and other chronic illnesses in the Coachella Valley. Gala festivities will begin with a festive sunset cocktail hour on the grounds of the O’Donnell Golf Club against a backdrop of the majestic San Jacinto Mountains. A short awards program will recognize inspirational honorees, followed by dinner, dancing, and the show starring Craig A. Meyer. Tickets for the benefit, at $395 and $500 per person, are available for purchase now. Individual VIP seats and sponsorships are also available. For more information, call 760-325-8481 or visit aapfoodsamaritans.org.

ABOUT CRAIG A. MEYER

Craig A. Meyer has traversed all four corners of the entertainment industry, making strong impressions in theatre, film, television, and music. On Broadway, Meyer created the role of Clinton Badger in MGM’s classic Meet Me In St Louis and toured nationally in Cats as Skimbleshanks, The Red Caboose in Starlight Express, and Mike Nulty in Irving Berlin’s White Christmas.

Television and film appearances include guest-starring roles on “Necessary Roughness,” “Will & Grace,” “Good Morning Miami,” “Family Law,” “General Hospital,” and “Fernwood 2nite” as well as working with Alan Menken on Disney’s Aladdin, and with Tim Rice and Elton John on The Lion King. Film credits include Leatherheads with George Clooney and Renee Zellweger, Joyful Noise with Dolly Parton and Queen Latifah, and Identity Thief with Jason Bateman and Melissa McCarthy.

In music, Meyer has toured internationally and recorded with music legends Barry Manilow and Frankie Valli and has headlined for Princess Cruises around the world.

Throughout Meyer’s busy career, he was repeatedly approached about his striking resemblance to Elton John and his uncanny ability to sound like the rock and roll legend. Meyer was eventually persuaded to expand his repertoire and began impersonating Sir Elton John. Today, he is considered to be the best Elton John tribute artist in the market whose strong vocals, striking resemblance and amazing talent on the piano has audiences everywhere remembering when rock was young.

ABOUT EVENING UNDER THE STARS

Over the years, Evening Under the Stars has featured the talents of a wide variety of entertainers. Previous headliners include: Gladys Knight, Barry Manilow, Cyndi Lauper, Lily Tomlin and the entire remaining cast of Laugh In, Mary Wilson of The Supremes, Pink Martini, The B-52s, The Go-Go’s, Darlene Love, the First Ladies of Disco (Linda Clifford, France Joli, Evelyn “Champagne” King, Maxine Nightingale, Pamala Stanley, Anita Ward, Martha Wash, and the ladies formerly of Chic: Alfa Anderson, Luci Martin, and Norma Jean), and the iconic Village People among many others.

Now in its 28th year of service to the community, AAP- Food Samaritans of Palm Springs remains dedicated to providing nutritional support to improve the quality of the lives of people living with HIV/AIDS and other chronic illnesses. HIV/AIDS continues to be a major health challenge in the Coachella Valley and across the world. While some people who have a diagnosis of HIV or AIDS are able to work and maintain a relatively healthy lifestyle, AAP serves those who unable to do so. Cancer, Multiple Sclerosis, heart and liver disease all present similar challenges to those who are living with these debilitating conditions. While there have been developments in treating these chronic illnesses, AAP’s clients are faced with daily challenges. AAP improves the quality of life of those who need it the most and it helps its clients live healthier lives with dignity and self-respect.

Tags Things to do in Palm Springs

Kate Buckley is a brand strategist, premium domain broker and consultant, interviewer, storyteller, visual artist, and award-winning poet & writer. She’s worked in media and marketing since 1997, holds an MFA in Creative Writing, and is the author of A Wild Region (Moon Tide Press) and Follow Me Down (Tebot Bach). A four-time Pushcart Prize nominee, her awards include a Gabeheart Prize and the North American Review’s James Hearst Poetry Prize. She was most recently shortlisted for the Bridport Prize. A ninth-generation Kentuckian, she’s made her home in Southern California since 1998.
Previous Nancy Sinatra Makes Rare Public Appearance at Palm Springs’ Plaza Theatre
Next PalmSprings.com Spotlight: Developer & Philanthropist Richard Oliphant