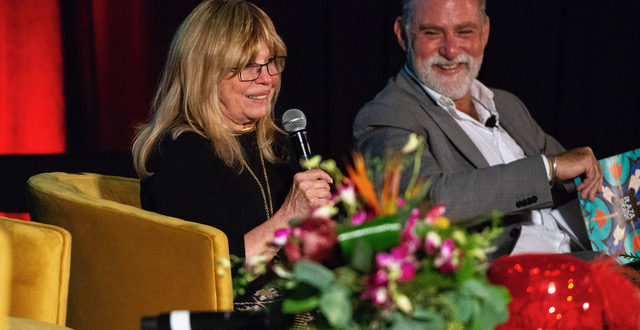 Have you been following what’s been going on with the historic Plaza Theatre in the heart of Palm Springs? The city of Palm Springs, led by former council member J.R. Roberts, has launched a campaign to restore the grand dame Plaza Theatre to its former glory. It’s a sizable undertaking with a $10 million price tag, but it looks like they might succeed—at least, if Nancy Sinatra has anything to do with it! Last week, in a magical blend of Hollywood glam and Palm Springs cool, Ms. Sinatra took the stage at the historic Plaza Theatre for a once-in-a-lifetime performance.

Sinatra wanted to be part of the effort and offered to make this rare public appearance. J.R. Roberts stated, “Nancy Sinatra and the Sinatra family are among the most famous of the many Hollywood celebrities who helped to put Palm Springs on the international stage. Nancy has many fond memories of growing up here and is a huge supporter of preserving our past and our city’s historic architecture. We are incredibly honored that she is involved in the effort to restore this important Palm Springs icon.”

The old theatre, which is sorely in need of restoration, was completely full and buzzing with energy as 800 ticket holders were in attendance for the rare public appearance of Ms. Sinatra.

Sinatra was greeted on stage by a raucous and affectionate standing ovation, which set the tone for the love fest to follow. She was joined by her daughters Amanda Erlinger and A.J. Lambert, actor and singer James Darren, perhaps best known for portraying “Moondoggie” in the Gidget films, author, producer and music historian Chuck Granata, and Wrecking Crew member Don Randi.

Rare family photos were shown and narrated, giving the audience a personal glimpse into the family’s life here in the Coachella Valley. Clips from Sinatra’s 1967 television special, “Movin’ With Nancy,” and from an unreleased TV special from 1973 that has never been seen by the public provided a look back at Sinatra’s spectacular career. During rehearsal Sinatra said that she had fond memories of seeing movies at the Plaza Theatre “from the time she was four years old” and that it was important to her to preserve it. “We’re fighting like hell to keep the culture of the original city alive” she said.

The audience thrilled to Nancy’s soulful rendition of Sonny Bono’s song “Bang, Bang (My Baby Shot Me Down”) and burst into rapturous applause when she ended the show with “These Boots Are Made For Walkin’.”

Armed with a signature style, catchy songs and memorable album covers and photo spreads, Nancy scored more than 60 chart hits and sold millions of records. She influenced music, fashion, hair and make-up trends, and became a role model for young, independent women, as well as an icon of popular culture around the world. “These Boots Are Made For Walkin’” kicked open the doors for a whole new category of women in music. Nancy’s tough girl attitude preceded the women’s liberation movement, and created the first rebel chick pop/rock singer. The era of the female rocker was born.

The goal of the event was to help raise funds and awareness of the restoration project. Modernism Week, which bolstered the campaign with an early donation of $100,000, assisted by making this event a part of its well-known 11-day festival to help make the event a success.

Roberts said after the event, “We had an incredible show and once again the Sinatra family comes through for Palm Springs. We had 800 people in the theatre to support fundraising for its restoration. I’m hugely grateful to all that are supporting this effort. The Plaza theatre holds an important place in Palm Springs’ history and needs to be restored.”

A steering committee made up of area movers and shakers has taken this effort to heart and is reaching out to preservationists, theatre aficionados, and civic-minded individuals and organizations in search of financial support for the $10 million restoration.

The comprehensive restoration and rehabilitation plan will provide essential infrastructure repairs, installation of new theatrical equipment, and structural improvements to ensure that the building meets today’s fire prevention and American Disabilities Act mandates. This historic theatre has played an impressive role in Palm Springs much like the Radio City Music Hall has in New York. When the restoration is complete, the Plaza Theatre will be poised to continue to provide the city and its visitors with top notch entertainment for years to come.

How You Can Help:

There are many ways in which the public may play a significant role in the Plaza Theatre restoration, including becoming a Founder, securing a Naming Opportunity, or making a donation. All contributions are tax-deductible to the extent allowed by law. For more information or to make a donation to support preservation and restoration, contact former Councilmember J.R. Roberts at 760-218-6330 or visit SaveThePlazaTheatrePS.com

Seminal Palm Springs architect Harry Williams designed the theatre in the Spanish Colonial Revival style. The theatre opened in 1936 with the premiere of the George Cukor film, “Camille,” with its legendary star, Greta Garbo, who allegedly slipped into the back of the theatre after the lights went down. Garbo’s co-star in the film, Robert Taylor, attended with Barbara Stanwyck.

Over the years, the theatre was the venue for memorable performances by entertainment giants Bing Crosby and Frank Sinatra. Performers Jack Benny, Bob Hope, and The Edgar Bergen and Charlie McCarthy Show broadcast live radio shows from the Plaza, bringing national attention to Palm Springs. It also was one of the most popular movie theaters in the growing Palm Springs community and was the venue for a number of motion picture world premieres, including “My Fair Lady” and “Music Man.”

In the late 1980s Sonny Bono created the Palm Springs International Film Festival at the Plaza Theatre. In 1991, a vaudeville-type revue called “The Fabulous Palm Springs Follies” launched and ran there for 23 years. The long-running show brought international exposure to the theatre and in many ways helped revitalize downtown Palm Springs.

The Plaza Theatre was declared a Class 1 Historic Site in 1991. This designation prohibits any structural changes that do not adhere to the original design. The theatre is in dire need of repair and restoration and the City of Palm Springs is committed to bringing it back to its original luster as the heart of the City.

Kate Buckley is a brand strategist, premium domain broker and consultant, interviewer, storyteller, visual artist, and award-winning poet & writer. She’s worked in media and marketing since 1997, holds an MFA in Creative Writing, and is the author of A Wild Region (Moon Tide Press) and Follow Me Down (Tebot Bach). A four-time Pushcart Prize nominee, her awards include a Gabeheart Prize and the North American Review’s James Hearst Poetry Prize. She was most recently shortlisted for the Bridport Prize. A ninth-generation Kentuckian, she’s made her home in Southern California since 1998.
Previous Malibu-based Artist Claudia Taylor to Ace Palm Springs!
Next The Music of Elton John to Highlight Food Samaritans’ “Evening Under the Stars” Gala 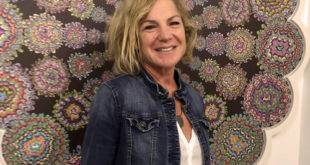 So much going on this month in Palm Springs—the season is in full swing! If …