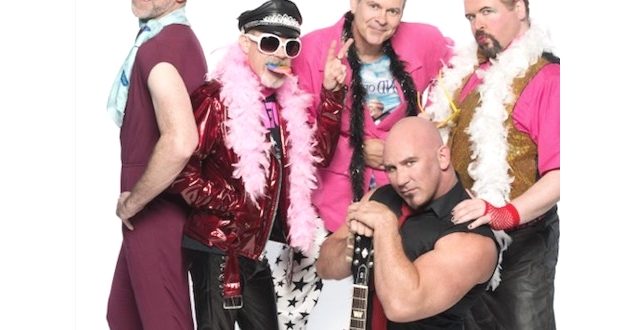 The 2018 Palm Springs Pride Festival is a free community event to be held November 2-4, 2018 on Palm Canyon Dr. between Amado and Baristo Rd. and on Arenas Rd. Donations will be accepted at entry points to keep Pride free.

Under the theme of Youth Power for Change, this year’s Pride event is dedicated to youth and all they’re doing to make the world a safer, more respectful place. Inspired by youth-led movement-building efforts that are awakening critical conversations for social change, this year’s lineup will host a diverse group of young and eclectic artists including dancers, singers, musicians, activists, comedians and DJs all converging on downtown Palm Springs this weekend, and is not to be missed!

The free two-day festival features Madame Gandhi, LA based electronic music artist and activist who produces music that elevates and celebrates the female voice performing her hit song “The Future is Female” from her EP “Voices.” Joining for the Arenas Block Party on Saturday is Subliminal Radio with the 1-year anniversary of “Holly’s House” featuring Holly Adams of KCRW, local DJs Glitter & Sand, and LA Based DJ Gage Hanks, who will carry the crowd into the sunset with sweet tunes and live body painting by Whorlow Jones!

Also appearing and taking our new Museum stage by storm will be Chico’s Angels, three beautiful and comedic Latina drag queens who work for pennies for their unseen boss, but are now moonlighting as sexy cabaret stars!  Palm Springs’ favorite, GayC/DC the world’s only all-gay tribute to AC/DC returns. Palm Springs Pride is also proud to welcome back LA pop singer and dancer Z LaLa, and Echo V, an out and proud LGBTQ+ Boy Band!

Performing for the first time at Palm Springs Pride is DYSON, a multi-platinum artist and songwriter, pint sized powerhouse from the UK. She’s known for her seductive vocals on the hit single “Sex Like Me” with Loud Luxury. Also joining for the first time is LA based singer-songwriter Tom Goss who’s sure to keep the crowd entertained by mixing tender ballads with energetic folk/pop. We are also very excited to welcome The Little Giant Acorn Foundation of the Arts and Everyman, who will be serving us some major funk throughout the weekend.

The free two-day Pride festival also features the Trans Chorus of Los Angeles who is leading the way in the choral world by being visible, bold, and proud! They are a chorus of transgender, gender nonconforming/gender non-binary, and intersex individuals who use their voices to bring awareness, understanding, power, and victory for the trans community.

For DC comic fans, there is a special appearance by Amy Pemberton, who voices Gideon on “Legends of Tomorrow.” Amy also has also played lead roles in the West End productions of Footloose, Jersey Boys and Rock of Ages.  Actress Tracie Thoms from Rent will make a special appearance and perform Saturday on the Museum Stage.

With 100+ performances, the diverse lineup of artists will offer something for everyone, including a dance workshop on Saturday morning with Australians hottest choreographer, Billie Casey, teaching the winning number in the Pride x Nanoloaf competition, and the Palm Springs Gay Men’s Chorus who close the Pride Stage on Saturday night.

The lineup includes a dance performance by Simeon Den and fabulous drag performances by Lola, reigning D.A.P.  Queen of Desert, Diva and Miss Rusty Waters and the Ladies of Risqué. Cisco returns to Palm Springs with his Latin hip hop, and additional DJ sets by Jon Doss and Jonathan Aleman.

All performances take place outdoors on the US Bank stage, the Museum Stage and the Pride Stage sponsored by Desert AIDS Project. ASL will be provided for the deaf community at the US Bank, Museum and Pride stages.

Some of the special highlights of the various days and performances include:

Jerome Elliott a four-time winner of the Desert Theatre League in acting, directing and cabaret performance and has performed in major cabaret venues around the country.

Douglas Graham has performed in the National Touring and Broadway companies of Bob Fosse’s DANCIN’, A CHORUS LINE, CATS (as the Rum Tum Tugger), Andrew Lloyd Weber’s PHANTOM OF THE OPERA, and CHICAGO with Chita Rivera and Ben Vereen. He has shared the stage with the world famous Rockettes and appeared with Sandy Duncan in Radio City’s “5-6-7-8 Dance”.

Additional features of the Pride Festival include a Children’s Headquarters (CHQ) space for games and crafts, the Youth Zone operated by Safe Schools Desert Cities and sponsored by Grace Helen Spearman Foundation, and HIV/AIDS testing by Get Tested Coachella Valley. Art of Pridefeaturing LGBT artists, the PSP Village, a VIP tent with free access for all festival attendees and theRecovery Oasis presented by Sober in the Sun. Arenas Rd will be home to DJs, drag, live performances & electronic dance music all weekend.  The downtown space will feature a new 36’ stage, 18’ video wall and a tennis court-sized shade structure. Over 150 exhibitors, non-profit organizations, food, and beverage vendors will be on hand near the Arenas Rd and Museum Stages along with the Beverage Lounges, featuring the Effen Vodka, Bud Light, a DeKuyper premium liqueur bar and Sauza Margarita bars.

The 501(c)(3) nonprofit organization brings together the skills, talents and vision of our diverse community through its programs which include the Harvey Milk Diversity Breakfast, Pride Honors Awards, OUT PSP a food and drink event, the Pride Parade, Pride Festival, and the downtown Arenas Rd. Block Party.

For more information about Greater Palm Springs Pride, visit www.pspride.org. Follow them on Facebook at www.facebook.com/palmsprings.pride. With the support of the City of Palm Springs, the 2018 Palm Springs Pride Week is scheduled for November 1-4, 2018. Highlights of this year’s event include a new Downtown Stage on Museum Way; more than 100 performances throughout the weekend; 150 back-to-back exhibitors booths; and plenty of outdoor food and beverage booths.

Kate Buckley is a brand strategist, premium domain broker and consultant, interviewer, storyteller, visual artist, and award-winning poet & writer. She’s worked in media and marketing since 1997, holds an MFA in Creative Writing, and is the author of A Wild Region (Moon Tide Press) and Follow Me Down (Tebot Bach). A four-time Pushcart Prize nominee, her awards include a Gabeheart Prize and the North American Review’s James Hearst Poetry Prize. She was most recently shortlisted for the Bridport Prize. A ninth-generation Kentuckian, she’s made her home in Southern California since 1998.
Previous Get Ready for “Cars, Stars and Rock ‘N’ Roll” Nov 1st-4th in Indio!
Next Give Back this Thanksgiving with the Desert Tennis Association and the Palm Springs Open!