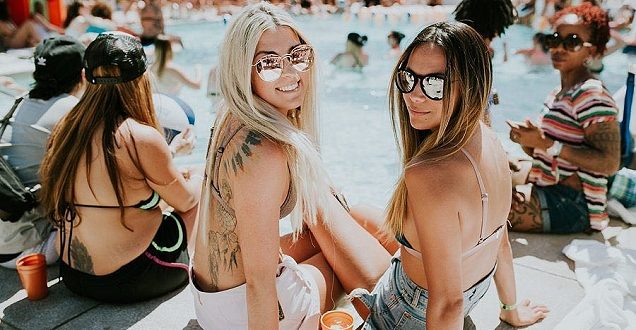 For this week’s PalmSprings.com Spotlight, I am happy to feature a guest post by Mariah Hanson, the creator of The Dinah—the largest lesbian event in the world, held right here in Palm Springs. The Original Dinah Shore Weekend is celebrating its 25th anniversary this year, and will take over the Palm Springs Convention Center as well as various clubs and hotels in Palm Springs from April 1 – April 3, 2015. This year’s musical headliners include Meghan Trainor and Christina Perri, as well as world class comedians, DJs, and more. This cultural and social phenomenon has become one of the largest and most important economic tourism boosters in the City of Palm Springs and the Coachella Valley. In this Spotlight, Mariah reflects on the events of the past 25 years and shares why she believes that the The Dinah offers us all a lesson in unity amidst diversity. ~ Kate Buckley

Mariah Hanson is the founder and CEO of the world-famous “Club Skirts Presents The Dinah,” the largest lesbian event in the world and the original version of the modern Dinah Shore Weekend of festivities in Palm Springs. More than an event promoter, Mariah is an avant-garde business entrepreneur whose past philanthropic endeavors have included a two-year term on the Board of Equality California and several years on the “Women’s Night” committee for the Los Angeles Gay and Lesbian Center. Mariah utilizes The Dinah as a platform to mobilize the LGBT community around humanitarian projects and social issues, and has lent her support to various charity causes and activist movements such as GLAAD, NOH8, LOVE IS LOUDER, The San Francisco Gay and Lesbian Community Center, The Women’s Building, National Center for Lesbian Rights, Jon Sims Center, Ladies Philharmonic, Uhuru Movement, HRC, Lyon Martin Health Clinic, Los Angeles Gay and Lesbian Community Center, and Equality California.

Mariah Hanson—Looking back on 25 years of The Dinah in Palm Springs, I am both amazed at our growth and humbled by the fact that over the years we have become the most renowned lesbian event in the world.

The Dinah brings women together from all corners of the Earth to create a space where thousands of women from divergent background unite under the common bond of life celebration…and some really good music! Women fly in from Russia, The Ukraine, Dubai, England, France, and so many other countries, not to mention of course, all fifty states. The Dinah is our entertainment Mecca.

Diversity and celebration describe this magical event. Last year, after a moving final performance by the talented Mary Lambert, I was inspired to jump on stage and deliver an extemporaneous closing speech to a sea of women.  I asked them to look around and see how colorful and diverse our weekend was, and to note the camaraderie and acceptance we all felt for five days even though we were all from so many different walks of life. In a moment of abandon I called out, “If we could do it, why can’t the world?” I then publicly invited The United Nations to come to The Dinah and learn a few things. I smile in retrospect because clearly I was carried away…or was I?

What I love most about The Dinah is that this beautiful weekend of women is an example of how if we arrive with open hearts, we create unity despite differences.  It’s a powerful message and one I believe The Dinah delivers exceptionally well.

But that’s not all it delivers. I’m also proud to have taken this event to new musical heights. People ask me how I pick the next big thing every year and while I’ll still keep my “formula” secret, I will say we are committed to offering the highest standard of music, and we spare no expense to deliver this pledge to our customers and to Palm Springs.

Events need to grow and shift with the times, but one thing that always remains constant is music. Music is another common factor that helps to bring diversity under one roof.   The Dinah was once just a big party for women and now, though still the Mother of all parties, it’s also a respected music festival—defined not only by the slate of top tier artists we present, but also by the audience for whom they perform.  That’s history in the making.

As I look back on the past 25 years, I am filled with a sense of accomplishment for what now defines the bulk of my life’s work.  But I didn’t do it alone. I have an amazing core staff who comes back year after year to produce The Dinah with me. I know I speak for them all when I say we feel a deep sense of gratitude and accomplishment for what has become the largest lesbian event in the world. As a team, we strive to remain not only relevant in an ever changing world, but also to achieve a standard of excellence in event production. It’s a lofty ambition, but we’re up to it. I look forward to offering the highest quality of music festival and events in Palm Springs for another 25 years!

Kate Buckley is a brand strategist, premium domain broker and consultant, interviewer, storyteller, visual artist, and award-winning poet & writer. She’s worked in media and marketing since 1997, holds an MFA in Creative Writing, and is the author of A Wild Region (Moon Tide Press) and Follow Me Down (Tebot Bach). A four-time Pushcart Prize nominee, her awards include a Gabeheart Prize and the North American Review’s James Hearst Poetry Prize. She was most recently shortlisted for the Bridport Prize. A ninth-generation Kentuckian, she’s made her home in Southern California since 1998.
Previous PalmSprings.com Spotlight: An Interview with Selby Dunham, Founder, BIGHORN Behind A Miracle
Next PalmSprings.com Spotlight: An Interview with Palm Springs City Council Candidate, Geoff Kors