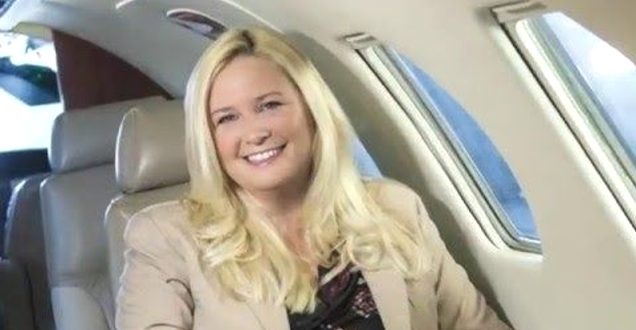 Denise Wilson has been featured, published, and quoted in publications such as Inc. Magazine, the Los Angeles Times, Business Jet Traveler, Forbes, Fox Business, Palm Springs Life, Barron’s, the Wall Street Journal,  and Aviation for Women Magazine. She is the author of “The Definitive Guide to Supplemental Lift,” a publication written to assist in choosing a private aviation provider. Denise is a member of Angel Flight West, Women in Aviation, Women in Corporate Aviation, Women Presidents’ Organization and the National Business Aviation Association.

KB: Denise Wilson, you have quite a story! Before you founded Desert Jet, you were a professional musician who thought it might be fun to become a pilot. Tell me about your journey from oboe to aviation.

DW: I was a professional oboist and a music teacher, working very long days trying to make a living as a musician.  I wanted a hobby to get some balance in my life so I took flying lessons at my local airport. I was hooked almost immediately and began flying during every free moment I had.  I loved training and progressing to the next level.  Eventually I was presented with a job offer as a pilot and had to choose whether to continue my career as a musician or become a full time pilot. Flying was so easy and excelling at the oboe was quite difficult—the audition process was nerve-wracking and just one small inflection in the tone of a note could get you disqualified. Aviation seemed to have a better career potential for me, so I made the leap.

KB: How did you go from professional pilot to founding Desert Jet? And why Palm Springs?

DW: As a professional pilot, I moved up the ladder pretty quickly but the career path wasn’t stable.  On 9/11, I was a captain for an airline but was laid off soon afterwards. I went to work for Aloha Airlines in Hawaii but the airline literally folded overnight after having been in business for 62 years.  Then I moved to the desert to fly an aircraft purchased by a private individual who also fell on hard times, and my job was in jeopardy again.  I had been putting my chance at success into the hands of others. I decided that instead of being reliant on someone else for career security, I needed to create my own path by building my own business. I formed Desert Jet in 2007 and began buying and selling aircraft here in the desert.  I applied to the Federal Aviation Administration for an air carrier certificate and received approval in 2009.  That’s when we started our core business of flying passenger flights.

KB: What is your business model?

DW: Our service is like a private car service of the sky.  Clients make a phone call to us and we fly them wherever they want to go, on short notice or in advance.  With our service there’s no need to own your own aircraft, to own a share of an aircraft, or to buy a jet card to be able to fly on a private jet.

We contract with aircraft owners who have availability on their jets and place those aircraft into our charter service [Desert Jet fleet pictured at right].  Aircraft owners benefit from earning revenue when their aircraft isn’t being utilized and from increased operational efficiency in our asset management program.

DW: Desert Jet is different than other companies because of our people and our core values.  While other companies take short cuts like underpaying their employees or not investing in the latest safety standards, we decided long ago that who we are and what we stand for matters more than anything else.  We hire the best people whose core values align with ours, and that leads to our clients experiencing that “WOW” type of anticipatory customer service that earns us loyalty with our clients.

KB: You currently have two locations: Coachella Valley (Thermal) and Orange County (SNA). Do you have plans for further expansion?

DW: Yes, we do have plans for further expansion. We are adding more aircraft to our charter service and we recently built a jet maintenance company to service jet aircraft. A lot more expansion is on the horizon and it’s all going to be based right here in the desert.

KB: I understand you’re married to another pilot. How did you two meet?

DW: I met my husband Rob while we were both working for the same airline.  We were at JFK on an employee bus filled with airline pilots but were the only two on the bus wearing the same company’s uniform, so we struck up a conversation.  Over the next year we ended up being assigned to fly together several times, became good friends, then fell in love!

Rob joined Desert Jet four years ago and is a Check Airman for the company.

KB: Since you both are already living your passion, what do you do for fun?

DW: We still fly for fun when we aren’t flying for Desert Jet in our small airplane, a Cirrus.  We’ve been able to do a lot of traveling recently as the business has matured—in the last few years we’ve gone to the Maldives, Australia, French Polynesia, Ireland, Monaco,  France and even Dubai, in addition to all the places we fly with the company.  As a business owner, there’s not a clear line any longer between traveling for “fun” or traveling for business as my life is a mix of business and fun.

KB: I have a Blenheim CKCS too, Murphy! We’ll have to get them together for a puppy play date. And, I have it on good authority that Murph loves nothing more than to fly on a private jet.

Kate Buckley is a brand strategist, premium domain broker and consultant, interviewer, storyteller, visual artist, and award-winning poet & writer. She’s worked in media and marketing since 1997, holds an MFA in Creative Writing, and is the author of A Wild Region (Moon Tide Press) and Follow Me Down (Tebot Bach). A four-time Pushcart Prize nominee, her awards include a Gabeheart Prize and the North American Review’s James Hearst Poetry Prize. She was most recently shortlisted for the Bridport Prize. A ninth-generation Kentuckian, she’s made her home in Southern California since 1998.
Previous PalmSprings.com Spotlight: An Interview with Modern Designer Chris Pardo
Next PalmSprings.com Spotlight: An Interview with Designer Christopher Kennedy