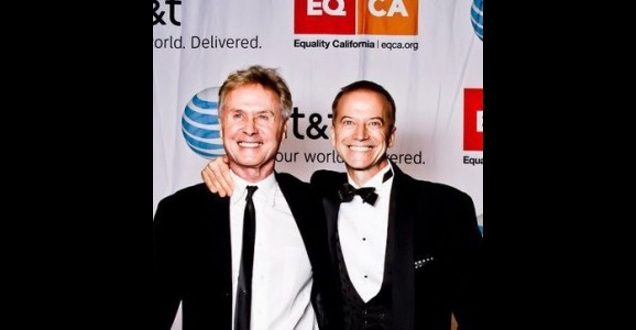 PalmSprings.com Spotlight: An Interview with David Rothmiller and LD Thompson of The LGBT Sanctuary Palm Springs

David Rothmiller and LD Thompson are prominent Palm Springs filmmakers at TrickDog Films as well as published authors, and have just launched a new venture, a nonprofit Group/Family home for LGBT Youth based in Palm Springs. The mission of The LGBT Sanctuary Palm Springs is to provide a physical and emotional environment of health, education and kindness for LGBT teens in Foster Care in the Greater Palm Springs area. LD, who is also a columnist for Huffington Post, recently published an article about what they’re doing with “The LGBT Sanctuary Palm Springs” which was featured on “HuffPost Gay Voices.”  Additionally, you can learn more from this short informational video produced by David and LD.

Kate Buckley: David and LD, our mutual friend Mark Jones turned me on to your story, and I was so impressed with our initial conversation. You both have had a fascinating journey, and this current chapter is particularly riveting. So tell me, how did you meet?

David Rothmiller: Though we didn’t know each other, we had many friends in common in Seattle. And my best friend had a large estate in rural Maple Valley, a “Gentleman’s Farm,” that he inherited. I lived nearby in a cabin on the Cedar River. Every Christmas my pal hosted an extravagant holiday blow-out at the farm and the downtown Seattle crowd would traipse out to the country for these great parties. So, in 1986, I met LD in the passage between dining room and kitchen, in the midst of a raucous party. We fell into deep conversation…until being pulled apart by our respective dates.

LD Thompson: Fast forward, to a year later… we met again, by chance, at a downtown bookstore. We picked up where we left off and have pretty much lived happily ever after.

KB: That sounds like the makings of a hit movie!

DR: Funny you should say that, Kate—on a personal/business note, our feature documentary film, “For My Wife,” chronicles the marriage equality debate in America, and producing it was a transformative experience for us as a couple. We got married in 2013, after 26 years of dating.

KB: In addition to being spouses, you are are also partners in TrickDog Films. At what point did you decide you wanted to also partner together on a family?

DR: When we began our romance, and realized the possible future ahead of us, I had to warn LD, “One day I will become a father.” I’d always wanted to be a father, but I didn’t know then, or understand really, that it could be possible for us both to be dads together. The passing years have educated us both on the possibilities.

For a time in Seattle, we were Therapeutic Foster Care providers for teen boys in Washington’s Sexually Aggressive Youth program. It sounds more ominous than it was—they were just unfortunate kids who got trapped in a system that criminalized their behavior. We had several boys come and go. They had all been sexually abused, some horrifically. Because they themselves were sexualized early, they then acted it out with other children, and it became a crime. Their only true crime, was being poor. There are no rich kids in Foster Care.

LDT: Moving to Palm Springs in 2010, it became evident to us that the time was right to grow our family. We fulfilled the California requirements to become licensed Foster Care providers, with the intention to adopt a son of our own. For whatever reasons, the county machine moves slowly…too slowly. We are still awaiting placement after almost three years. Our home study has finally just been done, so…yay!

KB: And this realization somehow led you to the formation of LGBT Sanctuary Palm Springs?

DR: While waiting, we considered becoming CASA volunteers and went to an orientation to learn more. (CASA serves the legal needs of kids in Foster Care.) We met with then Executive Director, Deborah Weiss, and learned we could not be both Foster parents and CASA volunteers, due to perceived conflicts of interest. But we also learned from Deborah of the sorry state of LGBT teens in the system. These kids get the worst kind of treatment. If, and when, LGBT teens come out in Foster Care, they report 100% abuse—physical, emotional or sexual. Let that sink in a moment…100%.

LDT: The California group home climate has been historically so toxic that the state is determined to shut them down. Where these kids will go is not exactly clear—some kind of hybrid, therapeutic/home care, we have been told. But the training that would enable this kind of redesign to be realized is not yet happening.

DR:  In the meantime, we have designed a program for LGBT teens that addresses their identity as well as community awareness, in an environment of safety and support. We will emphasize education as the key to success. By removing the fear and stigma of being LGBT, these teens can focus on healing and come to terms with their other issues. We realize that because of the rough treatment these kids have received, they will come to us with certain emotional issues. Our base line is: Yes, they may have issues, but being gay, or lesbian, or trans or gender non-conforming is not one of them.

KB: What are some of the ways that these LBGT teens end up in the system?

LDT: It is not uncommon for families to shun their LGBT offspring. Many of these kids end up in Foster Care. Many more are living on the streets. I know many close friends who “lost” their families for a time due to their sexual identity, But as adults, we have all created new “families” from friends, peers and loved ones in the LBGT community.

DR: Our residents will have reached the conclusion that they will most likely not be adopted. However, we can help them understand that they are already part of another family that awaits them.

KB: If The LGBT Sanctuary Palm Springs is approved (which, given your groundswell of support, seems reasonable), you’ll not only be setting an example for Southern California, but also be setting yourselves up as a pilot program for other cities and states. Is that correct?

LDT: Definitely. Our vision is to bring “Sanctuary” to other cities and other states—particularly those states where there is the most blatant discrimination. I grew up in Indiana and was kicked out of my home at seventeen when my parents discovered I was gay. Thankfully, my older brother took me in, but the disorientation and the sense of rejection was overwhelming.

I left Indiana and traveled with my brother to Alaska, eventually graduating from Nome High School. Talk about culture shock! I had to quickly adjust to an entirely different community and deal with considerable discrimination, as 80% of the kids were Native Alaskans and not too happy to have some white kid from somewhere else move into their midst.

I was lucky, actually, and my story was quite gentle compared to the realities of many LGBT kids growing up elsewhere, or even Indiana today. Imagine a trans kid trying to navigate within a fundamentalist household today and you can begin to glean a bit of the perils some of these kids experience, not just from peers, but often from those who are supposed to love them the most—their family.

KB: You began your experiences with foster care youth in 1994, when you worked with boys in the SAY (Sexually Aggressive Youth) program in Washington State. And you are currently licensed Foster Care Providers in California. Would you say that LGBT Sanctuary Palm Springs is a natural extension of your commitment to helping foster youths achieve their highest potential?

DR: Absolutely. When the glaring need became apparent, we felt that someone should do something.

LDT: It ended up being us.

KB: You’ve both worked with the best of the best of musical and entertainment artists. Why is working with LGBT youth so important to you now?

DR: We have come to realize that many of the “best of the best of musical and entertainment artists” were once LGBT youth. We’d like to think that some of our kids can find that in themselves.

KB: Why should this be so important to every person, period?

DR: These kids are not disposable. They deserve a shot at success. This can only come by helping them rebuild some sense of personal worth. Look back on your own life. You can point to the people who loved you, who believed in you, who showed you how to be a better person. These kids deserve that, as well. And we can make that investment. We can invest in their lives and their education, either physically or financially. We can help them find their unique gifts.

LDT: We feel it’s an investment that will absolutely return rewards.

KB: What do you both love most about Palm Springs?

DR: It’s odd. I wake up smiling most days. I’ve never lived anywhere that I’ve loved as much as Palm Springs.  It’s not just the climate, but socially there is so much going on and so many really good people. It’s a creative place.

LDR: Also, having a getaway in Idyllwild helps a bunch during the summer!

Kate Buckley is a brand strategist, premium domain broker and consultant, interviewer, storyteller, visual artist, and award-winning poet & writer. She’s worked in media and marketing since 1997, holds an MFA in Creative Writing, and is the author of A Wild Region (Moon Tide Press) and Follow Me Down (Tebot Bach). A four-time Pushcart Prize nominee, her awards include a Gabeheart Prize and the North American Review’s James Hearst Poetry Prize. She was most recently shortlisted for the Bridport Prize. A ninth-generation Kentuckian, she’s made her home in Southern California since 1998.
Previous PalmSprings.com Spotlight: An Interview with Modernism Week Chairman Chris Mobley
Next PalmSprings.com Spotlight: An Interview with Chef/Restaurateur Chad Gardner