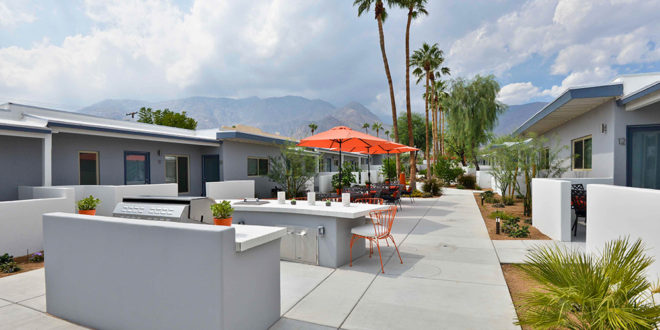 Stonewall Gardens to Commemorate 50th Anniversary of Stonewall Uprising at Annual Pride Open House
June is LGBT Pride Month, so chosen to commemorate the Stonewall riots of June 1969. Today, Pride Month celebrations include events attracting millions of participants around the world. Stonewall Gardens, Palm Springs’ first senior assisted living village for the LGBT community and friends, will host its annual LGBT Pride Open House that will commemorate the 50th Anniversary of the Stonewall uprising on Friday, June 28, at 10 a.m. at Stonewall Gardens.
Palm Springs City Council Member Lisa Middleton will be the featured speaker at the event. Refreshments will be served and tours of the community will be available. The event is free and open to the public—this is part of a series of events to entertain and educate attendees and residents—but seating is limited. RSVP to 760-548-0970 or aboeddeker@NorthstarSL.com. Stonewall Gardens is located at 2150 N. Palm Canyon Drive in Palm Springs.
The Pride Open House will take place on the anniversary of the 1969 uprising at the Stonewall Inn in New York’s Greenwich Village, after which the assisted living facility was named. Middleton will discuss her history, how that relates to her own transgender experiences, why the current transgender rights issue is important to the LGBT community as a whole, and how the community is stronger together. Audience members will be encouraged to share their own personal reminiscences of this historic event.
“When our community was in its early development phase, the name Stonewall was specifically chosen to be included in the name,” said Chad Boeddeker, Executive Director at Stonewall Gardens. “It was done partially as a nod to the generation of LGBT folks who became its first residents. In addition, we hope that the name Stonewall will continue to resonate with younger generations of LGBT people and their allies for many years to come, and that Stonewall Gardens will continue to be seen as a beacon of hope and a safe place for our LGBT elders.”
About the Stonewall Uprising
The Stonewall uprising was a series of spontaneous, violent demonstrations by members of the LGBT community against a police raid that took place in the early morning hours of June 28, 1969, at the Stonewall Inn in the Greenwich Village neighborhood of Manhattan, New York City. Fed up with police harassment and social discrimination, the crowd became increasingly agitated as the events unfolded and people were aggressively manhandled. The uprising is widely considered to be the single most important event leading to the gay liberation movement and the modern fight for LGBT rights in the United States.
About Stonewall Gardens
Located at 2150 N. Palm Canyon Drive in the burgeoning Uptown neighborhood of Palm Springs, Stonewall Gardens is a place where LGBT seniors and their friends can be cared for in an assisted living community that offers a supportive environment that celebrates their life experience. A 24-hour professional care staff caters to residents’ needs so they can enjoy resort-style living to the fullest, with the dignity and respect that everyone deserves.

Kate Buckley is a brand strategist, premium domain broker and consultant, interviewer, storyteller, visual artist, and award-winning poet & writer. She’s worked in media and marketing since 1997, holds an MFA in Creative Writing, and is the author of A Wild Region (Moon Tide Press) and Follow Me Down (Tebot Bach). A four-time Pushcart Prize nominee, her awards include a Gabeheart Prize and the North American Review’s James Hearst Poetry Prize. She was most recently shortlisted for the Bridport Prize. A ninth-generation Kentuckian, she’s made her home in Southern California since 1998.
Previous Greater Palm Springs Restaurant Week Returns: May 31st – June 9th, 2019!
Next July Happenings in Greater Palm Springs: Kate’s Top Picks